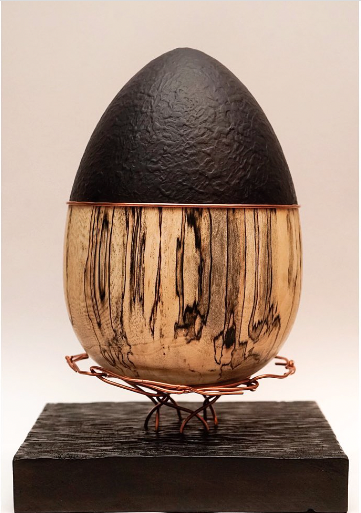 Spalted Sugarberry, gesso, India ink, milk paint, copper, and carved and ebonized cherry stand. — This egg was primarily a texture experiment. I applied gesso to the top half, and dabbed it with a pint brush as it dried. Then I ebonized via India ink, and afterward painted on several thin coats of generalfinishes “Twilight” milk paint. The bottom half of the egg showcases the amazing spalting of the Sugarberry wood. I left the upper half of the egg unfinished, and the bottom of the egg got a rub down with howard_products Feed-N-Wax. I added a copper accent afterward, to further distinguish the two contrasting halves of the egg. — The stand was also an experiment. I wanted the egg to be elevated—suspended, almost. After running through a bunch of ideas, I decided to tie in the copper accent on the egg, and crafted a makeshift copper basket that seems to grow out of the ebonized cherry base. I also textured the top of the base with some schaaftools gouges, which gives a sort of shimmering appearance (that plays with the shimmer that comes from hackberry/sugarberry grain). — All in all I’m pretty tickled with how this turned out.